Hey everyone! It's been a while since I've posted anything here...and I really shouldn't have an excuse for not posting my nail posts at the very least since I have been consistent in taking them as I've changed out my polish.  I feel like I'm always having to start my posts with an explanation or a rant of excuses, which is largely my own causing in the first place, due to my lack of involvement in actively posting.  All I can do is say that I will post when I am good and ready to do so...not gonna make any more promises regarding that.

What I have on my nails this time around is a combo of Blank Slate by Sonia Kashuk as the base color, and Clearly Spotted by Maybelline over as a sort of glitter top coat.  I am infectiously in love with this nail combination, mostly because it looks as though I have taken the time to do a splatter effect nail art detail to my nails, even though it is just glitter.  I love the cool undertone of the grey in the Black Slate shade by Sonia Kashuk, that beautifully compliments the multi sized and faceted glitter in the Clearly Spotted glitter top coat by Maybelline to create a stunning monochromatic look.  I think I will definitely be experimenting with this glitter top coat with other shades and finishes as the base color to be worn though the fall and winter season.  All photos taken by me.  =] 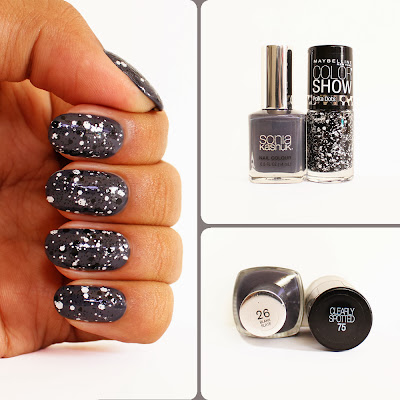 Posted by Reese Sakauye at 8:19 PM